The benefits of window grids

Window grids are also known as window grilles or Georgian bars. These are decorative bars that divide the glass of uPVC window into smaller sections. In the past, it was not possible to produce large panes of glass as we have them today. Therefore, small panes were joined in a variety of designs to allow more light into the house. In the modern days, large panes of glass are available, while window grids are seen as a way to adorn one’s house by simulating the “divided light” look of the past. In addition to creating an authentic historical style for your house, window grids add a sense of privacy. What is more, the effect of multi paned uPVC windows is achieved without actually cutting the glass, so no thermal energy is lost, and the price is much lower than that of the true divided light uPVC windows. Window grids are particularly useful for houses in certain historic districts where it is required to maintain the original window grid style. The inner-pane window grid is particularly attractive for being maintenance-free. Due to the wide selection of styles and materials, each house can be given a unique look.

Window grids come in two types: grids inside the glazing and grids on the surface of the glazing. 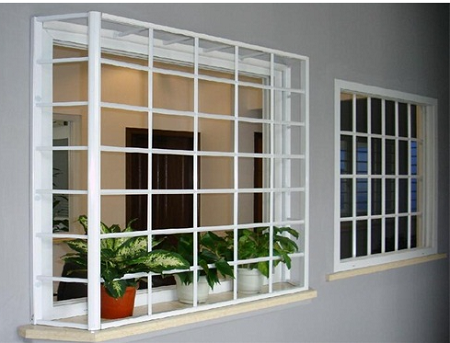 Grids inside the glazing also called inner pane grids are firmly fixed to uPVC windows between the panes of glass. It is possible to use any available RAL colour. This type of window grids allows cleaning the uPVC windows without any obstructions. Moreover, being inside, they do not gather dust and are maintenance-free. However, if looked up from close distance, this type does not provide the depth effect of real divided light uPVC windows. Inner pane grids for uPVC windows are often made of aluminium.

Grids on the glazing can be interior or exterior. Interior grids are placed on the interior side of the uPVC windows, so the divided light effect is mainly visible while inside the house. There is an option to use both an interior grid plus an inner-pane grid to create a more authentic look (known as duplex). Exterior grids are used when the focus is on the exterior of the house. In this case, grids are built on the exterior surface of uPVC windows. If combined with an inner pane grid, a more realistic effect is achieved (known as duplex). Grids made from solid uPVC do not rust and require no painting.

Window grid design possibilities are endless, but there are some already established patterns. They evolved in times when only small panes were manufactured. When choosing a grid pattern for your uPVC windows, it is important to consider the architectural style of your house, as well as the general style of the neighbourhood.

Colonial pattern divides uPVC windows glazing into perfect squares or rectangles. It is important to note that rectangles need to be more tall than wide.

Prairie pattern is usually composed of nine divided lights. There is a small square-shaped light in each corner, while the middle is occupied by a large rectangle-shaped light. This pattern is popular nowadays, because it does not obstruct the view as much as other patterns. A Queen Anne pattern is similar to the Prairie pattern, only that each corner light is divided into four squares instead of one.