"DIMEX" has been registered as a "European Union Trademark"

It’s our honor that the DIMEX brand has been recorded in the Register of European Union trade mark. The DIMEX trademark was assigned an Application Number #018326946 – by the European Union Intellectual Property Office (EUIPO). This is the most powerful evidence of the high quality of our products. DIMEX as the Director of the board “RAL Gütesicherung” and co-founder of the EuroWindoor Association. It is famous for excellent product design and consistent high quality.

DIMEX, one of the most famous brands of uPVC DOOR & WINDOW PROFILES in Germany, was established in 1933 in Germany with a long history of over eighty years. 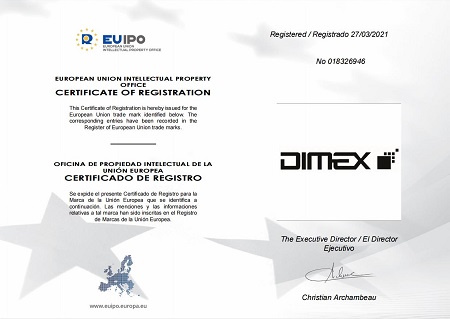 After years of development,  DIMEX won a good reputation in Europe and world wide

DIMEX (Taicang) Window Profile Co., Ltd was established by DIMEX GmbH in 1999. As a leading manufacturer of uPVC DOOR & WINDOW PROFILES, we have won the certification of ISO9001, SGS and SKZ. Persisting on German standards, implementation of the German formulation and production process, which makes our products quality of the international leading level.

As a pioneer and leader of European windoor profiles, DIMEX was the first manufacturer which proposed the concept of 'Heat insulation broken bridge on door & window' and produce aluminum insulation strips in the world. And also we were the first 80 Tit & Turn system U-PVC window profile's manufacturer in Europe.

DIMEX has been committed to the improvement of energy saving, environmental protectionand safety of Windows & Doors

We have been trying to contribute to improving the living environment of human beings, saving energy and reducing global warming. We will continue putting “satisfaction of our customers” in the first place with high-quality, eco-environment protection and low cost.